I feel like I’ve been to every cool place in Western North Carolina since I started working with Equinox in June of last year.  My field work has led me to many a beautiful, remote rock cliffs, to an abundance of old growth forests, to the peaks of some of the highest mountains in the state – all very extraordinary places.  The work I perform has helped stoke the fire inside of me that wants to explore the remotest, most wild areas in the state, which is why I want to share a piece of my experiences in North Carolina’s Wilderness Areas.

The Joyce Kilmer-Slickrock Wilderness, just north of Robbinsville along the TN-NC border, is the western-most area which I’ve explored.  It is home to the Joyce Kilmer Memorial Forest, one of the most impressive protected old-growth forests in the state.  There are yellow and tulip poplars over 200 feet tall and many feet around in diameter.  The terrain is also steep and full of water – an amazing amount of headwaters arise in the high country of the Slickrock, rushing down into the Cheoah River and eventually Lake Santeetlah.  The incredible amount of folds within these mountains give rise to an equally as impressive variety of flora and fauna – the highest mountains are hosts to the threatened northern flying squirrel, while the lowest streams provide habitat for the endangered Virginia spiraea.  Recently we’ve done some research in the Slickrock Wilderness for the US Forest Service’s Southern Research Station involving high-elevation stands of yellow birch trees – what a place to call your office!

Moving eastward, immediately I think of home, Brevard, NC, just about 25 miles from the amazing Shining Rock Wilderness – I haven’t worked here yet, but I’ve stomped around in there for many a season.  When I think of Shining Rock, I think blueberries and Blazing Stars in the fall.  I think of views of Graveyard Fields, of the skeleton trees there and the stunted bushes which remind me of Africa, even though I’ve never been.  I have spent a lot of time pondering the intricacies of nature while sitting on those sparkling rocks.  It sounds a little cheesy, I know, but that place can make you feel so small and unimportant – it’s great for both the body and the ego!  If you haven’t visited the Shining Rock Wilderness yet, I speak for many people when I say that I highly recommend it. 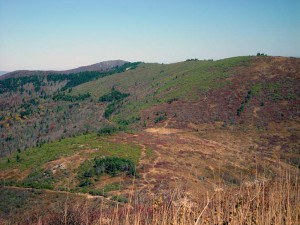 Last but not least, the past year and a half at Equinox have brought me into a wilderness completely new to me – the Linville Gorge Wilderness Area.  Located about 15 miles northeast of Marion, the deeply-cut gorge is sometimes dubbed “The Grand Canyon of the East” because of its similar, but diminished, appearance.  The Linville River bisects the gorge longitudinally, offering a stunning waterfall at the top and multiple cascades and slides as it winds its way south. In 2010, Equinox was hired by the National Forests in North Carolina to inventory all of the trails and a majority of the remaining off-trail acres for non-native invasive plant species.  I began working shortly after we were contracted, and so I had the privilege of personally hiking nearly all of the trails within the wilderness, not to mention bushwhacking into some extremely remote and treacherous uncharted terrain.  What I experienced was incredible: steep, dry, rocky, fire-scalded ridges and cliffs, sharply giving way to deep forests full of life.  Two species of federally-listed flowering plants occur at the highest, most exposed points in the gorge, both of which I had the privilege of identifying and monitoring.  Oh, and I can’t forget to mention all of the bears, birds, snakes and salamanders! 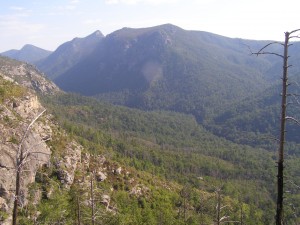 There are too many areas to talk about in such a short space – I wouldn’t do all of them justice.  I only hope that I can continue to make it into these amazing Wilderness areas, through work and through personal quest.  And if you’re interested in them, you can always contact the various state chapters of the Wilderness Society – they’ve worked to establish and preserve 110 million acres of our National Wilderness Areas since 1935!  Without their hard work, I, amongst millions of others, wouldn’t have experienced all of the extraordinary places that I have.