For years a heated debate has been held about forest fires and the impacts that they have on humans and the environment.  The arguments in either direction are myriad, complex, and not without bias – hardline environmentalists tout the regenerative effects of controlled and wild burns in fire-dependent environments while home and property owners decry the negative health effects and destructive flames of blazes, those that are purposefully set as well as wild-caused fires that are subsequently allowed to burn.

As both a human being and a plant ecologist I find it difficult to remain objective when discussing the topic of wildfire.  I have traversed enough charred terrain to understand that frequent, low-intensity fires are a natural and beneficial component to those ecosystems that rely on them; table mountain pine, a central and southern Appalachian endemic restricted to dry ridges, cliffs, and barrens, relies upon hot flames to sear their 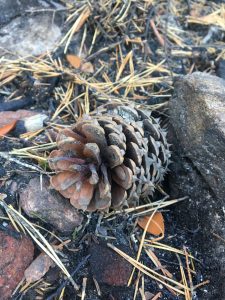 serotinous cones, allowing them to open and release their seeds.  Likewise, the diminutive mountain golden heather, a plant with a global distribution limited solely to rim and cliff habitats in western North Carolina, is endangered due to fire suppression and the subsequent overcrowding by weedier plants.  Furthermore, without intermittent natural blazes, the fuel load (i.e. forest floor tinder) mounts such that when a natural fire occurs its magnitude and extent are artificially increased, leading to amplified destruction.

I’ve also seen the damage that infrequent, devastating wildfires can cause to property, to the ecosystem, to human health.  Remember last wildfire season? The air was thick with smoke for days and I was out in the field during it – each day I returned home feeling like I had smoked a pack of cigarettes, my head aching, eyes red-rimmed and irritated; it was awful.  But those minor threats to my wellness were nothing in comparison to the lives and countless properties lost in the Gatlinburg fire, one of several within the last quarter of 2016 that contributed to the regional haze we all experienced.  Other major culprits were the Tellico, Boteler, and Party Rock fires in Swain, Clay, and Rutherford counties, respectively.

The latter of these major 2016 blazes, the Party Rock fire, is one of particular interest to me – it has been my temporary office!  Between 2015 and mid-2016 I spent countless hours traversing the steep slopes of a 400-acre tract of private conservation land in Bat Cave, NC, documenting its conservation values and ecological processes.  The property is essentially bisected from north-to south by a major state highway, a feature that ultimately acted as a protective “fire-line” of sorts when the late-December Party Rock fire raged westward over Shumont Mountain and toward the tract; in the end, the half that lies to the east of the highway went up in flames while the western half remained unscathed, and I was hired to return to the burned area and update the ecological report, detailing impacts to the natural resources contained within the easement.  This was a very rare and exciting opportunity for me: to experience and describe a forest in its undisturbed, burned, and regenerative states – truly a trifecta and one that I am eager to share.

Upon revisiting the property in early spring of 2017, I could tell that when the Party Rock fire swept across the property it burned hot and fast, eating up the loads of fuel that had built up over the years.  Although I did not observe any areas of high-intensity, catastrophic fire, the kind that would entirely burn a tree from root to canopy (referred to as “crowning”), I did notice many areas where the fire’s heat appeared to have spiked, leaving behind tall flame licks, some up to 25 feet, on trunks of mature trees.  In these areas the shrub layer, generally dense with rhododendron or mountain laurel, was decimated, and some of the subcanopy saplings, such as sourwood and sassafras, were killed to the ground.  Populations of the rare lobed spleenwort, a fern which inhabits narrow crevices in dry rocks, were seared to a crisp.  I observed slopes where the fire appeared to have crept upslope quickly and with high heat, burning through leaf litter and organic soil leaving only loose soil behind; active erosion was noted where soils were severely stripped, and sediment from these areas was transported a considerable distance downslope during post-fire rain events.  Furthermore, for years the greater Bat Cave/Lake Lure area has been rife with a multitude of invasive exotic plants, the worst offenders being kudzu, tree-of-heaven-, and princesstree; seedlings of these species were popping up across some of the worst-burned slopes.

As time and the elements continue to work their slow m 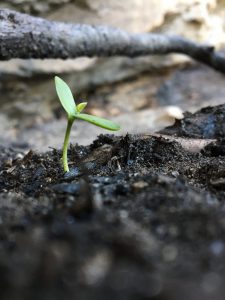 agic, the true ecological impacts of the Party Rock fire (and all wildfires, really) will be revealed.  Fire ecology is an intricate web and ultimately at the mercy of time.  Humans, tragically egocentric, will forever argue over the benefits and detriments wildfire poses to humans, but from a purely ecological perspective there is much to be gained by planning for, allowing, and monitoring wildfires: healthier, more resilient forests and natural communities, increased seedling recruitment, reduced fuel loads limiting future fire intensity, control of insects and disease, and an overall more robust ecosystem.