Yesterday Equinox’ David Tuch was on hand to celebrate the ribbon cutting for a portion of the Tuckaseegee River Greenway.  Equinox developed the Master Plan for this landmark gr 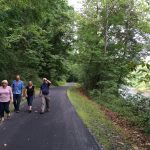 eenway in Jackson County and was recognized at the event for their efforts.  The first phase that was constructed includes a 1-mile multiple use paved trail that runs along the Tuckaseegee River (aka the Tuck).   This is the first greenway trail in Jackson County and marks the official beginning of their greenway syst 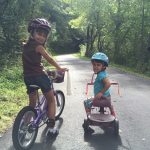 em.  The participants attending the ribbon cutting ceremony were very excited about the future of greenways in Jackson County and many were heard saying “it needs to keep going”.  And keep going it will.  With plans to install a bridge over the river in the spring, this greenway will be highly visible from Highway 107 for all the residents and visitors to see.  The bridge will serve as a beacon for greenway users to ride, walk, or jog on this wonderful greenway corridor that has views of the river and feels like it has been in place for years.  The Master Plan calls for a small pocket park that can only be reached via the greenway system and plans to develop this pocket park will only encourage a high level of use of this scenic river corridor.