Considerations for Stormwater and Erosion Control

We have all seen it, large rain storms causing water to move through a site and taking things with it.  Stormwater (water moving on the surface as the result from a storm) can generate a lot of power with its volume and velocity.  The resulting power can cause erosion and destroy structures with lack of proper planning.  The old school of thought was to collect the water as soon as possible and pipe it away into large basins on larger properties and to use French drains and other piped systems on smaller residential properties (out of sight out of mind).  A more wholistic approach to stormwater tries to do one main thing, slow it down on the surface and allow the water to infiltrate.

Increases in impervious surfaces, such as roads or buildings, increase the overall speed and volume of stormwater on a site as the water is unable to infiltrate into the ground in the impervious locations and picks up speed as it flows across these surfaces.  Increased stormwater volumes and speeds have negative impacts on water quality in general and more specifically can cause damage to structures through flooding and create erosive conditions.  Quickly moving water carries with it pollutants that end up in our waterbodies. Slowing and detaining stormwater allows pollutants to settle out and infiltration to recharge ground water and aquifers. 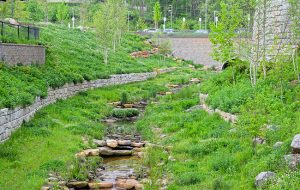 Stormwater Management is the process of diverting, slowing or detaining, and infiltrating such runoff. There are many types of Stormwater Control Measures (SCMs) that address water quantity and water quality.  The most common SCMs found in residential areas are rain gardens, vegetated road-side swales, and natural buffers.  The main purpose of these measures is to slow the water, increasing the time it takes for the water to outfall from the property and increase infiltration.  This goal is achieved generally through diverting water to and through planted areas.

There are two main areas of concern regarding increased stormwater runoff due to development and an increase in impervious surface.  First is flooding and the impact to structures on site.  Such impacts could include, but are not limited to roads washing away, standing water, rotting wood infrastructure such as fencing or siding, and flooding into habitable structures.  The second area of concern is erosion and sediment pollution.  Sediment is the number one pollutant in the state’s water bodies.  Suspended particles in the water reduce water clarity and cloud out sunlight reducing oxygen in the water. Evidence of this is ‘muddy looking’ water in streams and runoff during rain events. 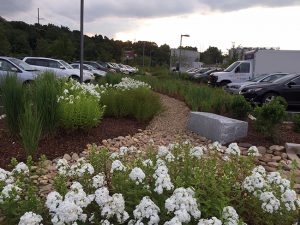 Just as the addition of impervious surface increases the speed of stormwater, measures should be taken adjacent to the impervious surface to slow the water.  Such measures include a vegetated swale to move water to a desired location or a vegetated depression to detain the water, such as a rain garden.  SCMs can be used in sequence to aid each other as an additional benefit. 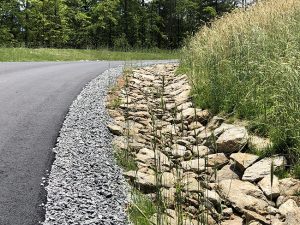 With ongoing development there will be areas that will see increased stormwater speeds.  These are mainly areas where water becomes channelized. These areas should be reinforced with vegetation and/or rock.  Such areas include shoulders along roads, culvert outfalls, and other stormwater outfalls.

Providing a minimum of a 30-foot vegetated buffer from all streams and other natural water bodies in shallow sloped areas and even greater than a 30-foot minimum in steeply sloped areas allows excess runoff, not captured by SCMs, to be slowed by the buffer and allow the vegetation to remove some of the pollutants prior to the runoff entering the water body.  In the same vein, when developing, keeping as much vegetation as possible will keep water velocities manageable.

Water can be powerful. So, when considering development and land or property purchase consider proper planning for stormwater.  Call us at 828-253-6856.  We can assist you with proper design from the beginning providing creative solutions in any situation and help you avoid the issues stormwater can cause.