It’s that time of year again in western North Carolina, and with the changing leaves comes big game hunting season and the need to take extra safety measures when hiking in the woods.  Most people are aware of gun season, which starts the week of Thanksgiving and runs through early December, but fewer people are aware of how early archery season starts in western NC.  Archery season opened on September 12th of this year.  The North Carolina Wildlife Resources Commission (NCWRC) map below depicts the various hunting seasons per region: 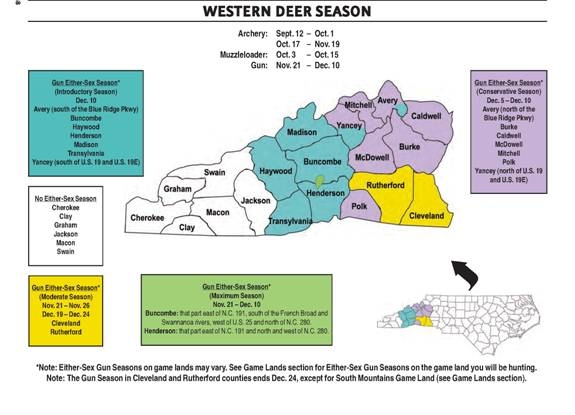 With two new laws that went into effect during last years hunting season, more archers will be taking to the woods.  The NCWRC changed the law that allowed only handicapped/disabled persons to use a crossbow during archery season in NC to any person.  Also the NCWRC has opened Sunday hunting during archery seasons on private lands only.  Also, few are aware of the Muzzle loading gun season which opens this year on October 3 and runs an extra week to October the 15.  During this time of year people should take extra precaution when recreating in the woods.  In fact, it is a policy at Equinox that any persons doing field work must wear an orange vest year-round.  I would recommend the same to anyone that is out and about in the forest, especially during this time of year.  Don’t forget about your four-legged pets also – they should have a bright colored collar or some type of vest to ensure they’re not mistaken for game.  For a full list of the hunting regulations in North Carolina see http://www.ncwildlife.org/Regs/index.htm.