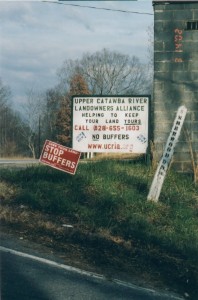 ‘Save Your Land!’ ‘No Buffers!’  ‘Don’t Suffer the Buffer’.  Not everyone in McDowell County had these signs in their yard or believed in what these signs stood for, but the atmosphere in the community was certainly highly charged with protest and opposition as the Muddy Creek Restoration Partnership began its efforts in 1998 to restore ecological health to the Muddy Creek watershed.  There was a lot of fear then.  Landowners feared that their land might be taken.  And they had a point because the State of North Carolina, at about that time, was considering regulations that would restrict a person’s right to use his or her property within 50 feet of a stream.  Some of us were also afraid because we were the ones who had to walk up to rural landowners’ doors out in the middle of seemingly nowhere on a cold call and try to recruit them into our conservation projects.  Do visions of guns and dogs come to mind?

The fear is pretty much gone now.  In its place is a lot of trust.  Some of the vocal opponents of regulated stream buffers have now become friends and allies of the all voluntary Muddy Creek Restoration Partnership.  How does this transformation take place?

I think it starts with trying to meet people right where they are.  Suspending the prejudice and judgment and trying to understand the other persons’ point of view.  It means meeting the landowner when that person has the time – often on Saturday late in the afternoon after the farm work or shopping has been done.  It means connecting on a personal level – like helping an older gentleman split and stack his firewood before having the talk about conservation.  It also helps when the Partnership that Equinox works for is based on voluntary and collaborative participation with willing landowners.  The Muddy Creek Restoration Partnership has never had any regulatory authority and has never wanted it.  We preach that mantra over and over.  Along with that, we quietly show that our conservation solutions can really help.  Good conservation can help a farmer better manage risk.  It can sometimes provide supplemental income.  And buffers, when left alone or replanted properly, can actually protect property from washing away during flood events.  It also helps to have the committed support of Partners who do what they say they will year after year after year.  On the Muddy Creek project, this means the McDowell County Soil and Water Conservation District, Trout Unlimited, the NC Wildlife Resources Commission and Duke Energy Corporation.  The Partnership has other valuable members but this group of four has really stood out in its level of commitment.

Sometimes we as people can get too focused on the goal that we lose site of the process.  And that is usually to our detriment.  Equinox’ preferred process is to keep people front and center. ‘Do good work and good work will happen’.  So after 10 years in Muddy Creek, the Partnership has secured 25 miles of stream restoration that is now either on-the-ground, in design or in some stage of negotiation.  Four stormwater BMPs.  Trails and parks.  The economic value of this restoration work and the process to develop it is worth around $18 million.  The project has involved almost 40 different landowners who have voluntarily chosen to participate with us.  The Partnership is still alive and well and maturing.  It has won awards from the NC Wildlife Federation and American Fisheries Society.  We think this is all good work.  Equinox is pleased to be the coordinator and water resource planners on this fine example of conservation collaboration! 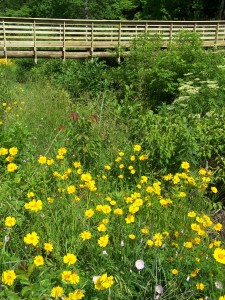