This article was originally published the Transylvania Times and is reprinted here with permission of the author – Owen Carson, Botanist at Equinox.

Formed many millions of years ago, the mountains of western North Carolina are home to numerous unique geologic formations, from the rocky summits of Grandfather Mountain to the serpentine barrens of Buck Creek.  These complex aboveground forms that remain are stark reminder of the subterranean processes that originally shaped our landscape.  On a local scale, Transylvania, Jackson, and Macon Counties (amongst others) boast a handful of these geologic wonders, namely the unique high elevation granitic domes that are exemplified by sites such as Looking Glass Rock, Cedar Rock, Laurel Knob, Whitesides, and The Fodderstacks.  These granitic upwellings, known as plutons, rise sharply above the surrounding land, their sheer cliff faces and crystalline crests shining bright on a sunny day.  And although a bare, exposed rock face might seem like an inhospitable environment, the amount of flora and fauna that finds a way to survive is truly remarkable.

While the margins of a granitic dome are generally wooded, the rock itself is sparse with vegetation at a glance.  However, peer closer and you’ll find a diverse and complex array of plants interacting around the 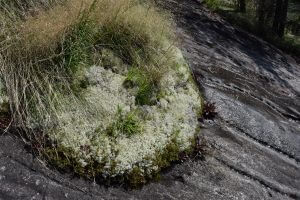 limited resources that can be found on the dome.  Moss mats are the primary component interacting with the rock face – these mats originate as small clusters of moss and lichen that have taken hold in depressions or crevices in the granite.  The clusters become anchors for larger clumps, which in turn begin to support larger, more diverse flora.  As the anchoring plants become smothered and die, they start to form soil; this soil will eventually allow grasses, wildflowers, and even woody plants to flourish!  Sadly the mats are impermanent, in constant cyclical succession, and when heavy rains pour down the steep pitches of the dome mats can be loosened and scoured from the wall, sloughing downhill and leaving bare rock behind for the process to begin anew.