Believe it or not, nine-banded armadillos (Dasypus novemcinctus mexicanus) may soon be common residents of North Carolina.  Originating in South America, these bony-armored mammals have slowly ambled their way north into ever-warming climates.  They’ve long since been residents of southern central states, migrating north across the Rio Grande from Mexico, but were first introduced to the southeast in Florida, and have since spread to occupy surrounding states.  And as climate patterns generate warmer environments further north, the armadillo’s range continues to expand.

The first sightings in North Carolina were recorded in 2008 – several photos of roadkilled armadillos from southeastern NC counties (Robeson, Brunswick, Bladen) were submitted to the Wildlife Resources Commission.  Then in 2010, photos of dead specimens in Jackson County were submitted.  The most recent photograph of a live armadillo was taken in early 2015, in Jackson Co. 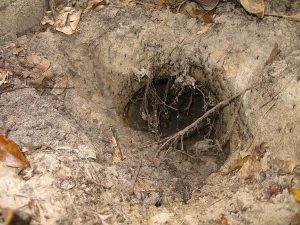 So what’s the deal with these tank-like creatures?  Is it a good or bad thing that they’ve made it to NC?  Well, there’s really no simple answer.  Biologically speaking, armadillos are loners – they are generally nocturnal or crepuscular, forage alone for mainly insects and their larvae, and spend most of their time in underground burrows. Pretty benign then, right?  Well, they haven’t created the kind of problems that, say, coyotes do as they have expanded into new territory, but recent studies from Florida have shown armadillos to be disrupting local ecology by feeding on the eggs of sea turtles and bobwhite quail.   They’re also blamed for causing structural problems, such as burrowing under buildings, or creating matrices of holes within lawns, gardens, and livestock enclosures.  Last but not least, armadillos can harbor Hansen’s disease, or leprosy, thus there is an innate human fear of transmission of the disease across species.  This has been proven to occur in some southern states, but there is no reliable data as to the incidence rate; so really it’s just something to consider, not to fear.

All of that said, there really haven’t been any major issues with them moving into North Carolina – more carcasses on roadsides, but no significant ecological disruptions…yet.  No cases of leprosy via armadillo have been reported, either.  But it’s definitely a species to keep a close eye on. 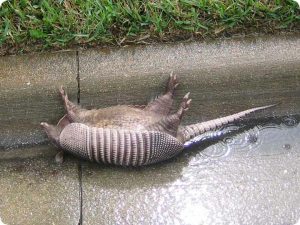 With their affinity for eggs, one could foresee potential problems with armadillos affecting populations of ground-dwelling birds, reptiles, and amphibians.  So for now, keep your eyes peeled for these creatures.  If you do see one, dead or alive, give the Wildlife Resources Commission a call and let them know where you saw it – with your help, they’ll be able to better track and monitor populations of armadillos on their northward adventure, which, in turn, will help them plan for their future in our state!