For Owen Carson, working as an ecologist in the world of conservation it’s not uncommon to find rare species of plants and animals on properties that he inventories – in fact, most of these tracts contain an array of listed species, uncommon natural communities, and outstanding water resources.  But there is one piece of property that really stands out in his mind as exemplary in terms of clean water, diverse species, and unique habitats: the Meadowbrook Property. 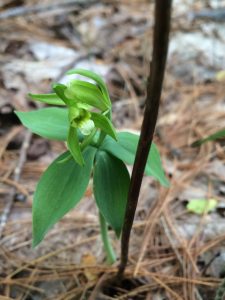 Meadowbrook, a privately-owned property located in western Henderson County, is an exceptional plot of land containing over 1,000 contiguous acres of forested land, more than 20 miles of streams, and boasting healthy populations of numerous rare species, several of which are considered to be exceptionally rare at the state, federal, and even global levels.

Underlying geology drives the strong presence of granitic bedrock in places across the tract – they are characterized by short but significant cliffs, massive boulders, and rocky coves.  Undulating hills are covered with mature oak-hickory forest, and stream bottoms are dense with ancient rhododendron and mountain laurel.  Apart from its natural elements Meadowbrook also contains more than 150 acres of USDA Certified organic apple orchards that supply fruit locally and regionally.

The property’s abundant water resources include nearly the entire headwaters of Folly Creek and Sentelle Creek.  These headwater reaches cascade from thick bedrock bands in upper coves or aggregate as seeps in side-slopes of lower ridges.  Streams across the tract are clean, cold, and full of life – native brook trout occupy many of the branches, as do a variety of other fish and a whole host of benthic macroinvertebrates; amphibians are abundant in riparian areas. 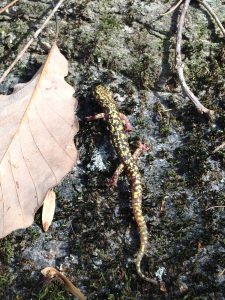 The true gems of Meadowbrook are found in the least-disturbed environments.  Green salamanders, endangered in NC, are found in numerous locations associated with dry, shaded bedrock outcroppings – several populations contained over 15 individuals in adjacent crevices!  Furthermore, Owen was delighted to discover a new population of the fabled small-whorled pogonia, generally described as the rarest orchid to occur east of the Mississippi.  The tiny, cryptic plant is holding on strong at Meadowbrook, with numerous individuals observed in flower over a two-year monitoring period. 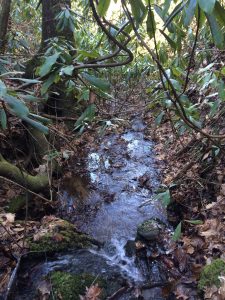 Clean water, healthy vegetation, and diverse species are the cornerstones of a functioning ecosystem.  Protection of these resources with a conservation easement ensures their habitats will not be subjected to manipulation that could result in the degradation of rare species habitat or ultimately the extirpation of these precious flora and fauna. We at Equinox are so proud to be a force in the preservation and conservation of some of our state’s most important natural resources.